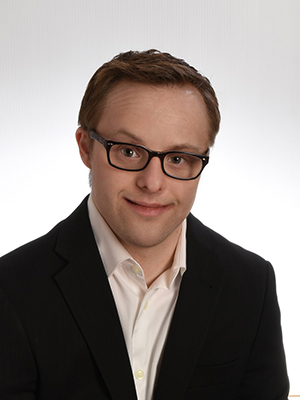 “Be Strong. Rock On.” That’s the mantra Andrew Banar lives by.

Andrew was born with Down syndrome, but he has never let that hold him back. At the young age of 26, he has become an inspiration for so many people in the local community and across the globe.

Growing up, Andrew admired his cousin who went to college and was determined to do the same thing himself. In an effort to raise money for his tuition Andrew set up a lemonade stand, but his mother Karen had a better idea.

Andrew has always had an obsession with music and would often draw guitar players and drummers. Karen encouraged Andrew to put his artwork on t-shirts and the rest is history.

Andrew’s love for rock and roll was transformed into ‘Group Hug Apparel’ with a goal of “Helping Sick Children One Shirt At A Time”. Andrew and Karen sell Andrew’s t-shirts, hoodies, bags and other items at local festivals and events. To date, Group Hug Apparel has raised more than $40,000 to help raise awareness about Down syndrome.

In 2014, Andrew’s dream of going to college finally came true. He enrolled in the Community Living Skills Program at St. Clair College where he says the best part was learning to make hotdogs in cooking class.

While working part-time at Colasanti's Tropical Gardens, Andrew still finds time to volunteer and donate to several organizations. Andrew has been honoured numerous times for his work in the community receiving the ‘Hero Award’ from the Canadian Down Syndrome Society as well as winning the Queen’s Diamond Jubilee Medal, just to name a couple.

When Andrew isn’t busy putting smiles on the faces of those in the community, he likes to spend time rockin’ out on his drum set at his home in Kingsville where he lives with his mother and father. 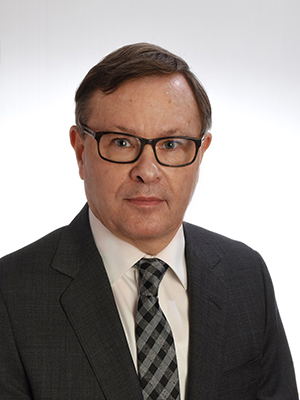 In 1968, David’s father, Walter, had a concept for a new company and he asked his son, “What do you want to do after you graduate?” Unsure, David said he’d be happy to land a job with any company and his father’s reply was, “Why work for someone else?”

The trio got things started by converting a Ford tractor into a rough terrain forklift. Walter had a background in forklift manufacturing and sales and the Sellick team designed its model to address the flaws other machines had.

For the past 47 years, Sellick Equipment has been building outdoor forklifts for companies across North America as well as England, Australia, Nigeria, Pakistan and Chile; they even have machines at the White House in Washington.

From a company that started with just three workers, they now employ more than 80 people serving 61 companies at 237 locations grossing nearly $35-million in sales every year.

Later this year, Sellick will open its new facility in Harrow allowing the company to build larger equipment to keep up with global demands.

David says his time at St. Clair played a major role in making him the person he is today and when speaking with young people about their career choices he always recommends St. Clair because “You’re guaranteed to get a job.”

David credits his success to his biggest mentors, his mother and father, and the endless support from his wife Susan and daughter Alexandra. 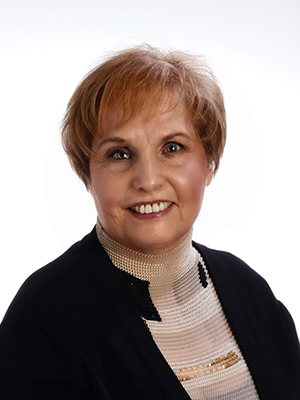 “You will always face obstacles. Know who you are, decide where you will go and choose a life worth living.”

It was these words from her father that sent Judy Robinet on a life long journey to enrich the lives of those living with impairments.

At 15, Judy’s life was forever changed when a car accident left her visually and physically impaired. She was hospitalized more than 30 times, needing multiple major surgeries. Not one to get discouraged and knowing she always wanted to be a teacher, Judy persevered.

Judy enrolled in Early Childhood Education at St. Clair College having been inspired by ‘The Miracle Worker’, the story of deaf and blind Helen Keller. After St. Clair, Judy attended the University of Windsor followed by Michigan State University where she became acquainted with Stevie Wonder through a mutual friend.

It was from Wonder’s story of not letting blindness get in the way of his musical dreams, Robinet’s experience working as a counsellor at the Canadian National Institute for the Blind and her father’s advice to her as a teen that ‘A Life Worth Living’ was born.

What began as a book about parenting children with impairments became so much more. ‘A Life Worth Living’ is now a registered charity with the likes of Stevie Wonder and, until his death in 2008, Canadian musician Jeff Healey on board for support. The goal of the charity is to provide an online multimedia resource for those seeking answers about their impairments.

Judy credits her family with giving her much of her strength. Her husband Don and daughter Jennifer are heavily involved with ‘A Life Worth Living’, but Judy says she’s most proud of her four grandchildren who have helped raise thousands of dollars for the charity. 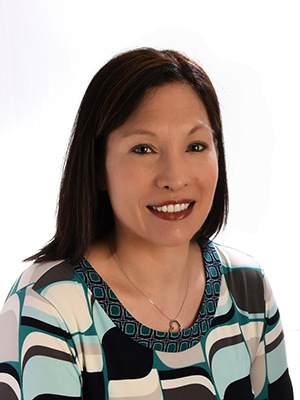 Dr. Snezana Ninkovich says her desire to help others can be traced back to her time at St. Clair College.

She was introduced to the world of healthcare through the College’s Medical Laboratory Technology Program. It was the practical, hands-on training she received at St. Clair that planted the seed for years to come. Looking back, Dr. Ninkovich says doing things other students only got to read about still has a tremendous impact on her medical career to this day.

It was during her College placement she realized she wanted to give up the confines of the lab for the fast-paced world of the emergency room. Dr. Ninkovich loved visiting the ER and knew that was where she belonged.

After stops at the University of Windsor, McMaster University and Western University Dr. Ninkovich found herself under the guidance of a local physician, Dr. Paul Ziter, for whom she says she owes a great debt of gratitude for the wealth of knowledge he passed on.

Dr. Ninkovich has now been an ER physician at Windsor Regional Hospital for nine years while also acting as the ER’s Medical Director collaborating with all departments at the hospital.

Dr. Ninkovich has played an integral role in the formation of the ‘City of Roses Community Emergency Medicine Conference’. Now heading into its fifth year, the event brings more than 350 medical professionals from across the globe to Windsor to discuss the latest medical innovations.

Her dedication to her community doesn’t stop there as she also takes part in annual fundraising efforts of Hiatus House, the Canadian Cancer Society and several other local charities.

Dr. Ninkovich credits her husband Ramone and 11-month-old daughter Vivian for being the glue that holds her together. 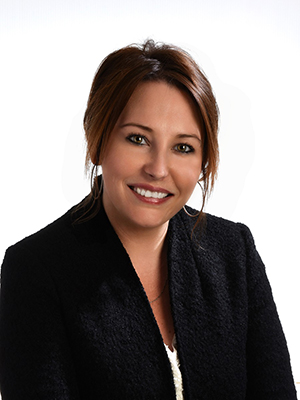 Liz Farano always knew she was a “big picture thinker”.

While still a student at St. Clair College, she got her first taste of real-world experience at Hogan’s Printing where she was heavily involved in designing logos and advertising material for dozens of local companies, events and festivals.

On the road to becoming the Vice President of Marketing at Douglas Marketing Group, Liz gained experience at several companies including PentaMark Worldwide/Canada and Hargreaves Charbonneau & Associates lending her creative mind to projects for companies like Chrysler Canada, Volkswagen of Windsor and Caesars Windsor.

To date, Liz is most proud of her work on the ‘It’s In Your Jeans’ campaign for the Windsor and Essex County Cancer Centre Foundation. Liz and her team set out to raise $4-millon for a Men’s Health Centre with state-of-the-art lab equipment. That goal was well surpassed with a grand total of $5.4-million resulting in the purchase of the da Vinci Robot; meaning male patients in Windsor no longer have to travel to London for treatment. The ‘It’s In Your Jeans’ fundraising model is now used by organizations across North America to raise money for cancer care and research.

Liz has always been eager to give back to her community. She is the co-founder of ‘100 Women Who Care’ which generates over $40,000 annually for local charities. This sparked the creation of ‘100 Kids Who Care’ and ‘100 Men Who Give A Damn’ which both donate to the Windsor-Essex region as well.

Liz’s latest venture is the ‘Sole Focus Project’ aimed at raising awareness and funds for those with mental health or addiction problems.

Liz says all her inspiration and energy to push forward comes from her family.

When she takes a break from her busy work day she loves spending time with her husband Ryan, who she met while working at Hogan’s Printing, and her two sons Ethan and Adrian. 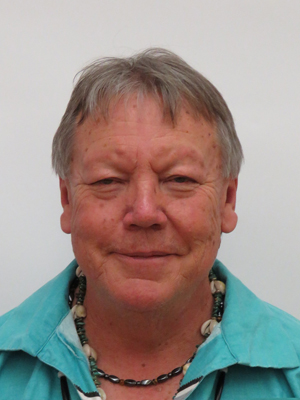 After leaving Walpole Island, Dan missed the peacefulness of home. He had never been to a city like Windsor before, from his apartment on Louis Avenue the police sirens and busy traffic kept him awake at night. He wanted to go back to Walpole Island, but he knew the importance of getting his St. Clair College diploma and the doors it would open for him in the future.

Over the past 50 years ‘Chief Dan’ has become a symbol of success in his community.

Growing up, hockey was life for Dan. When choosing a college to attend his only question was, “Do you have a hockey team?” He enrolled at St. Clair and became the first person in his family to pursue post-secondary education.

Dan’s academic career spanned from St. Clair to Western Michigan University followed by the University of Phoenix, but he always knew he wanted to return home to help his people. After a short stint working for a consulting firm in Detroit, Dan was hired as Walpole Island’s Economic Development Planner. While he enjoyed his job, he knew he could have more impact in politics. He was elected Chief for the first time in 1988.

Dan played an integral role in establishing the island’s first school as well as the construction of a new daycare centre, water tower and water treatment plant. He also orchestrated the purchase of the Walpole Islander ferry and is currently working on establishing an international trade port with Michigan.

In 2014, Dan was elected Chief for the third time inheriting a debt of more than $10-million. Without the help of any outside consultants, he has brought Walpole Island’s financial house back into the positive.

Dan says he owes everything to his wife Donna, sons Robert and Brett and his daughter Kara for all their encouragement and support over the years.